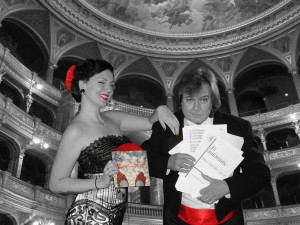 There are some hidden and not so hidden things to look for in the video.

If you look carefully at the art gallery where the red shoes are walking/dancing, you’ll notice that the pictures on the left wall consist of Carey Kress (the much-loved and now sadly departed vocalist on Face Dancer’s “This World” album), FD Automatic (Scott and Steve), Scott and his wife Teri, and Little Murph. On the back wall is a picture of Scott and DJ Long from the Growing Up Different days, a McGinn kitty, Steve with his daughter Maddie, my nose and my eye, Sean Murphy (the editor) and David Butler (the cameraman). Sometimes they’re hard to see – but they are there.

The most obvious reference is to “The Wizard of Oz” via the Ruby Slippers and the witch fingers. (The Ruby Slippers were custom-made by Robin Reed and worn by Dorothy Kirkwood. “Stunt” shoes were used in the champagne and ice cream shots.)

Another obvious reference is the Sphinx that appears over Scott McGinn’s shoulder. As long-time Face Dancer fans will know, “The Sphinx” was an amazing song written by Scott McGinn and Carey Kress that appeared on “This World”.

The moon shots are a reference to my favorite song of Scott’s – “Life on the Moon”.

Scott as the maestro is a direct reference to Michael Powell and Emeric Pressburger’s 1948 film “The Red Shoes” in which the composer Julian Craster is also the orchestra conductor.

Scott flailing around trying to pick up the sheet music and conduct is a direct reference to Buster Keaton as the hapless piano player in Charlie Chaplin’s film “Limelight”.

The red ballet slippers and the “phantom slippers” (worn by Rebecca Parks) are direct references to Hans Christian Anderson’s short story “The Red Shoes” in which the red shoes refuse to stop dancing even after the little girl has removed them.

Steve Hancock singing into the evil red shoe is a direct reference to Maxwell Smart’s shoe phone in “Get Smart”. Steve was also (unknowingly as it turned out) channeling the late great Michael Hutchence from the Aussie band INXS.

Meagan Tackett was clearly channeling the cartoon character Betty Boop. And probably Bettie Page too now that I think of it.

Megan’s blown kiss is a direct reference to Woody Allen’s “Stardust Memories” in which a then-unknown Sharon Stone blows a Marilyn Monroe-esque kiss in the direction of Allen’s Sandy Bates.

Joe Gebbia unplugging the electricity is a direct reference to “Airplane” where the character Johnny “accidentally” darkens the runway.

Joe wearing the evil red shoes is a homage to the late great Divine (who had to have all of his high-heels custom made) and to Pee Wee Herman dancing in high heels to “Tequila” in “Pee Wee’s Big Adventure”.

The ice cream in the shoes is an old idea of mine that never went away. Don’t ask where it came from. The background is the White Drawing Room in Buckingham Palace (which is actually red!). King George III (the King who lost America) is on the immediate left.

The multiple Joes passing before the camera was an idea that I couldn’t sell to a client for a commercial. NEVER throw away a good idea. This 6 second shot was the single most complicated in the entire video. Using 2 different Macintosh computers and a variety of software, it took 4 days to pull this off.

The shot of Joe in front of the Domino Sugar Factory was one of the views from the nursing home in which my mother spent the last few years of her life. She was enchanted by the sign and I smile every time I see it.

The red record behind Joe’s head is a direct reference to Pasolini’s film “The Decameron” in which the “saints” wear gold-painted discs behind their heads as “halos”.

The interior “warehouse” shots were taken in an abandoned brewery in Canton, which has since been torn down. I found my childhood cat Misty (who lived to be 20 years old) not far from this warehouse – hence the reason for Little Murph’s appearance in that particular scene.

The clock could be a reference to Face Dancer’s “Time Bomb” but more likely it refers to me constantly running out of time!

There were other references that didn’t make the final cut for one reason or another. But that doesn’t mean they won’t show up later in another video!