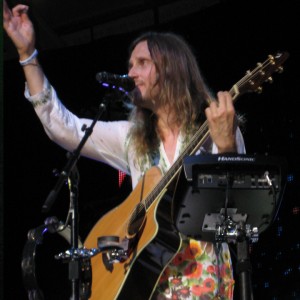 I spent as much time with Jon as it took for him to sign my poster and CD booklet. He seemed nice enough, but it bothered me that he signed his autograph simply “Jon” – which is exactly how Jon Anderson signs his autograph. A bit of grandstanding, I thought. He’s a wonderful singer, but everyone knows he’s only keeping the seat warm until Anderson returns.

UPDATE: I just had the opportunity to preview the new Jon Anderson/Jean Luc Ponty CD Better Late Than Never and I am sorry to say that Anderson is not singing well at all. Years of asthma have reduced his pitch, and he simply cannot hit the high notes. 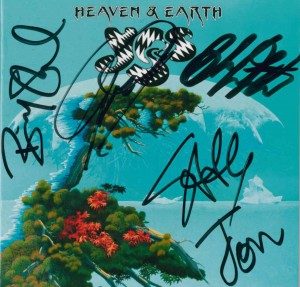 Jon’s autograph in the lower right.

So barring a miracle, Davison is the new Jon.

“Strangely enough, Jon’s name came up when we started working with Benoit,” Yes bassist Chris Squire recalled. “In fact, my friend, Taylor Hawkins (the drummer for the Foo Fighters), had been telling me for years: ‘If you ever need a replacement (singer), I know exactly the guy.'”

Davison was the singer for a Tennessee progressive rock band Glass Hammer, whose music was heavily influenced by Yes. Lyrically, Glass Hammer is inspired mostly by their love of fantasy literature and by their Christian faith. Although by their own admission they have tried to avoid becoming an overtly Christian band, their 2002 release Lex Rex was a concept album based on a Roman soldier’s encounter with Jesus.