I spent as much time with Alan White as it took for him to sign my copy of Ramshackled. I jokingly asked him if he remembered it, and he winked and said, “Of course.” Ramshackled is unique among Yes solo projects in that White didn’t write a single song on the album. He simply played on it with a bunch of his friends.

Prior to Yes, White had some interesting friends indeed. In 1969, he received a call from John Lennon (he thought it was a joke), asking him to join the Plastic Ono Band for a show that became the hit album, Live Peace in Toronto 1969.

He also performed with Lennon on the Imagine album and the single, Instant Karma. When Lennon introduced White to George Harrison, he was asked to perform on the All Things Must Pass album. He has also performed with Yoko Ono, but the less said about that the better. 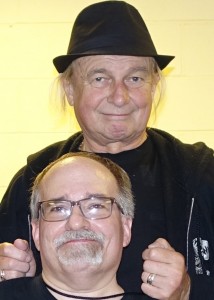 White at 66 is still a very LOUD drummer, and his playing has gotten busier in the past few years. Watching him walk on and off the stage, it was clear that he’s having some back trouble.

No handshake, but if you look at the group picture, he has both of his hands on my shoulders. Obviously not afraid to touch people.

Yes trivia: During the sessions for 90125, producer Trevor Horn and engineers JJ Jeczalik and Gary Langan took a scrapped Alan White drum riff and sampled it into the Fairlight CMI (the first time an entire drum pattern had been sampled into the machine). This led to the booming drum sequence on the Art of Noise’s Beatbox that has been sampled endlessly since then.

He has also recorded an album with jazz guitarist David Torn and bass god Tony Levin for a project called Levin Torn White.