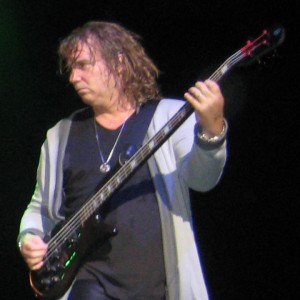 Not technically a member of the band, but my guess is that Billy will stay on as long as YES continues. He seemed nervous and shy, but when I asked him, “What was it like to work with Shatner?” he cracked up laughing and the tension broke. For those who don’t know, Billy Sherwood has recorded two albums with William Shatner: Seeking Major Tom and Ponder the Mystery. Major Tom was an album of covers with a LOT of famous musicians. Ponder was a group of originals; Shatner wrote the lyrics, Sherwood the music. Billy also played most of the instruments, but many members or Yes past and present also appear. “It was the greatest gig in the world,” he said. “Except for this one.”

In his spare time, Sherwood has recorded with World Trade, Conspiracy (with the late Chris Squire), Circa (with Tony Kaye) and Yoso with Bobby Kimball (formerly of Toto). 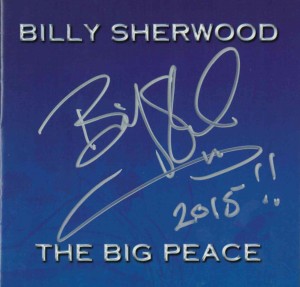 I also asked him if it was true that Milton Berle was his Jewish godfather, he smiled and said yes. I told him that some friends of mine made a commercial with Berle back in the early nineties and found him to be very nasty. Sherwood laughed and said, “Well, he did have a mean streak!”

AND he shook my hand! I guess two out of five isn’t bad.

He kept chatting amiably while signing his CD The Big Peace (his first of nine solo albums!), and I suspect the conversation would have gone on much longer, except that I was bumped out of the way. Fans! You gotta love ’em!